Signup for our newsletter.

Right from Day 1, the new director of the Port of Hanstholm will face clear cut demands to generate growth and thus turn around business at Denmark’s port to the Atlantic, which, despite its unique location and leading position among European fishing ports, has had many years with declining revenue and earnings. A strong operating result in 2015 and annual growth of at least 10% until 2018 are among the specific targets that the Board of the Port of Hanstholm, headed by chairman Martin Vestergaard, have established in a new business plan adopted at a board meeting on 1 December.

With a focus on four specific areas of business with growth potential, the plan is conceived as a dynamic tool for the new management to realise a number of strategic targets for the port situated in the north-western part of the Danish peninsula of Jutland. “It is a very ambitious, but also realistic business plan, in which we seek growth of 20% next year, which will lead to very good profits in 2015,” says Martin Vestergaard, chairman of the Board of the Port of Hanstholm. The improved result is based on growth forecasts and a series of adjustments in relation to staffing, revenue and expenditures.

The clean-up has caused losses in 2014, but also provides balance in the business
The new port director is expected to take the post at the start of 2015, after the former port director was dismissed from the job in August. Meanwhile, the new board has been charged with cleaning up and taking hold of the reins at the Port of Hanstholm, an independent municipal port that is 100% owned by Thisted Municipality. “We are doing this through two initiatives: Bringing the business into balance and establishing a viable business plan,” says Martin Vestergaard.

The Board has conducted a test of the finances, ensuring that the business is brought into balance by depreciating assets to their fair value. Martin Vestergaard does not hide the fact that this manoeuvre will cause the 2014 financial year to end with a significant loss, which will be covered by equity.
“The equity is still considerable – more than DKK 120m to be exact. So the loss is not critical or in any way threatening to the Port of Hanstholm,” stresses the Chairman of the Board. In addition to a positive operating result and revenue of at least DKK 28m in 2015, the targets and thus the demands on the new port director in the new business plan include annual growth of at least 10% until 2018 and operating earnings of at least 15% from 2016. In addition, new jobs directly or indirectly related to the port must be created.

Maintaining ambitions of a port expansion
The Board also maintains its ambition of expanding the port before 2020 – possibly in stages. “The financial targets established by the business plan are independent of the port expansion. We are consciously choosing to conduct these activities in equal and parallel tracks, as this ensures optimum focus on both of them,” says Martin Vestergaard. The four focus areas with growth potential are a combination of existing and new areas of business. This includes the current core areas of fishing and goods, combined with new business areas such as renewable energy and offshore. A port expansion will provide even better conditions for growth in all four focus areas.

The port’s strong position in fishing will be exploited and further developed
The Port of Hanstholm is Denmark’s leading consumer fishing port and has the country’s largest fish auction, making it one of the largest ports of its kind in northern Europe. In its new growth strategy, the port will seek to improve the exploitation and development of its strong position in both consumer fish and industrial fish to boost revenue and earnings. The goals include attracting and maintaining an increased number of landings by vessels with both consumer and industrial fish. The plan will ensure efficient logistics for the rapid sale of landed fish – and that the port is able to handle the largest vessels, which require service when they call into port. The relocation of ferry routes has had a particularly negative impact on ro-ro goods. In the future, the Port of Hanstholm will have a much greater focus on selected niches in the goods sector and strategic collaborations, rather than competing for market share. The port will exploit its unique location as a transit port and shipping port for project cargoes, for example to offshore wind farms and installations in the North Sea, as well as goods shipments to Germany.

Hanstholm to be a “plus energy port”
According to the new business plan, renewable energy is a key area of business in the future Port of Hanstholm. This will be a natural extension of the port’s and Thisted Municipality’s ambitious aim of being a leading municipality and plus energy port. “The new business plan is a dynamic tool that will be assessed and updated on an ongoing basis as the planned initiatives are implemented,” says Chairman of the Board Martin Vestergaard. The Port of Hanstholm employs more than 1,900 people in connection with the port’s activities, with a total production value of approximately DKK 2.6 billion. 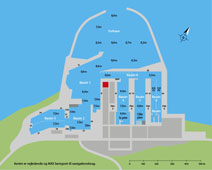